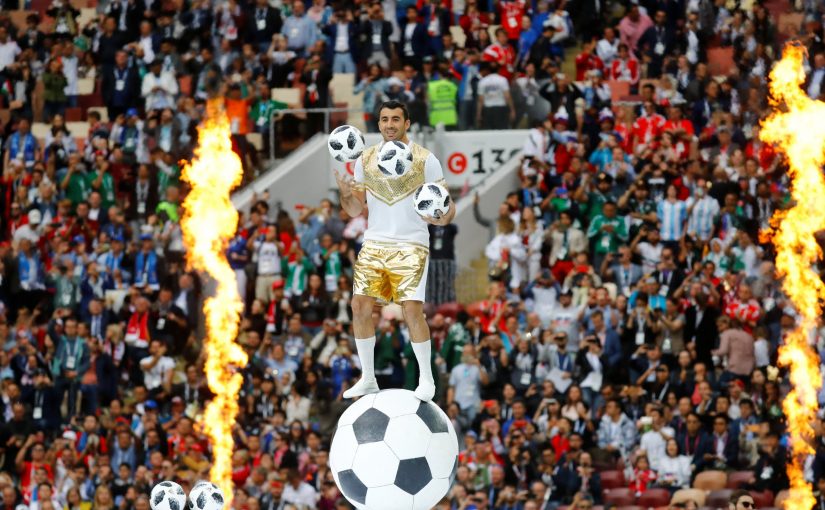 The group stages are over, onto the finals! If you’re anything like me, the World Cup has occupied a significant proportion of your free time over the last two weeks.

TV coverage has seen pundits highlight interesting (and questionable) match statistics during games; kilometers covered by players in a game (I’d love to get my hands on that data) to the all-time top scorers.

This, of course, inspired me to collate a data set of my own for analysis to look at some of the numbers behind the World Cup (we already know Russian cities have the most museums for fans to visit between games)…

There are 32 teams from 6 continents (only Antarctica is not represented — they don’t have a team).

Excluding management and those in team support roles, for every one player in the Iceland squad there are 13,431 people in the Icelandic population. One pundit noted that most people have a second-degree connection that links them to an Icelandic player! Brazil has the biggest pool of talent to choose from with one player per 8.75 million people.

The Luzhniki Stadium in Moscow, where the final will be held, is by far the largest stadium with a capacity of 81,000. The average capacity of all stadiums is 48,427. Many of the stadiums are home to second division Russian teams including the Fisht Stadium, Sochi (47,700 capacity), Volgograd Arena, Volgograd (45,568), Nizhny Novgorod Stadium, Nizhny Novgorod Stadium (45,331), and the Mordovia Arena, Saransk (44,442) — larger than many English Premier League grounds.

The median age of all the World Cup stadiums is about one year (median first opened date is 2017.5). Only two were opened prior to 2013; the Luzhniki Stadium, Moscow (opened 1956, redeveloped for 2018 World Cup) and Ekaterinburg Arena, Ekaterinburg (1953).

Costing a rumoured $1.5 billion USD to build, the St Petersburg Stadium, St Petersburg hosting 7 games works out to cost $214.3 million per game. The average cost per game across all 12 stadiums and 64 games is $79.9 million.

The total spent on stadiums for the 2018 World Cup alone (remember all but one were opened or refurbished in the last 5 years) is a staggering $5.3 billion dollars!

Looking at costs in more details, based on the number of games a stadium will host and each stadiums capacity, each seat at the St Petersburg Stadium, St Petersburg works out to cost $3,145.06 (hosting 7 games at a maximum capacity of 68,134). The Luzhniki Stadium, Moscow is the most cost effective costing $705.42 per seat (7 games / capacity 81,006) — a figure still well below average ticket costs as we’ll see below…

Tickets to the World Cup 2018 range from $22.40 to $1094.28. Russian residents receive a healthy discounts on tickets, meaning they could follow a team to the final (7 games) for just $370.92 (it would cost them slightly more to watch Russia because the opening game has a premium ticket cost). Those wanting the best category of ticket would pay $3,072.96 to watch their team make it all the way to the final (assuming they do!).

Whilst I’m lying on my sofa, players are running over 8 kilometers per game in searing heat. The average daily highs across all stadiums is 24°C with lows of 15°C. Surprisingly, there is an 50% chance of rain daily, on average. In Ekaterinburg, the likelihood is as high as 66%.

With more time, I’d like to explore the distances teams have to travel between stadiums and their training sites.

Chapman Freeborn, an aircraft charter company, have conducted such an analysis for the group games. They found Egypt covered 7,316 miles travelling to their group games. Compare that to Colombia who travelled just 1,158 miles.

As noted at the start of this post, I would also like to obtain in-game statistics from FIFA to perform a more micro analysis of games.

The World Cup is expensive; the total cost of stadiums hosting the 2018 World Cup is a staggering $5.3 billion dollars!