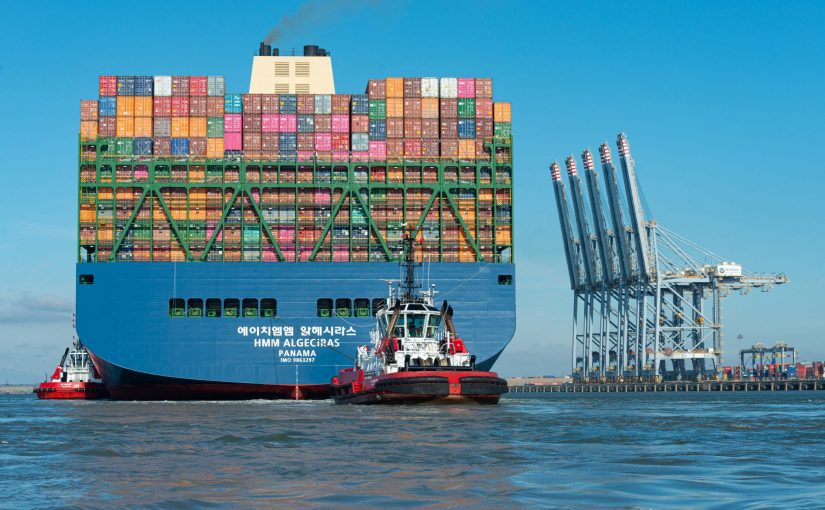 From many kilometers away these ships look huge, though I never really gave them a second thought.

That was until the Ever Given became stuck in the Suez Canal a few weeks ago, and a photo of a large bulldozer looked like a toy truck when stood next to the ships hull.

Turns out these ships are huge, and much, much bigger than I first thought.

The twenty-foot equivalent unit (abbreviated TEU or teu) is an inexact unit of cargo capacity, often used for measuring container ships and container ports. It is based on the volume of a 20-foot-long (6.1 m) intermodal container, a standard-sized metal box which can be easily transferred between different modes of transportation, such as ships, trains, and trucks.

All other costs and analysis can be assumed correct at time of writing (March 30th).

You have probably seen many of these names printing on the side of ships previously.

Maersk, the largest company by TEU capacity, has capacity for almost 4.1 million containers (TEU’s) on 705 ships.

Container ships have been built in increasingly larger sizes to take advantage of economies of scale. Though container ships are also subject to certain limitations in size.

Furthermore, some of the world’s main waterways such as the Suez Canal and Singapore Strait also restrict the maximum dimensions of a ship that can pass through them.

To purchase and launch this ship cost its owners, the Korean company, HMM, over $140 million. HMM own 7. Thats a total value of $980 for these 7 ships. Which doesn’t sound to bad considering that a private Airbus A380 (when on sale) was priced at $402m to buy.

For reference, Apple sold 218 million iPhones in 2018. So the largest container ship can supply around 12% of the world total iPhone demand alone.

I couldn’t find specific data on engine consumption. The amount of fuel actually used on a sailing depends primarily on the ship’s speed. Most ship engines have been designed for top speeds ranging between 20 and 25 knots per hour, which is between 23 and 28 miles per hour.

At a high level I found a Panamax container ship (Panamax and New Panamax are terms for the size limits for ships travelling through the Panama Canal)  consumes about 63,000 gallons of marine fuel per day at optimum speed.

The Ever Given Problem

When the Ever Given was blocking the Suez Canal, shipping companies had two options; wait, or head around the Cape of Good Hope.

According to Refinitiv via the New York Times:

A journey from the Suez Canal in Egypt to Rotterdam, in the Netherlands — Europe’s largest port — typically takes about 11 days. Venturing south around Africa’s Cape of Good Hope adds at least 26 more days, according to Refinitiv, the financial data company.

A rough estimate provided using this calculator, puts the cost of the largest ships operated by HMM (South Korea) travelling through the Suez Canal at about $800,000 in fees. Even with these fees factored it, it is still significantly cheaper than going around.

In the end the Suez was only blocked for 6 days, so even with a backlog of ships waiting to move through, it would have been more cost effective (and time effective) to have waited (though hindsight is a wonderful thing!).

In the case of converting gross tonnes to litres I use diesel fuel as the fuel type (not heavy marine fuel) to provide a rough estimation. I could not find any liquid conversion measurement tables for marine fuel, but these would make the fuel calculations significantly more accurate.

Access to fuel consumption data for the worlds largest ships would also improve fuel estimations produced in this post.