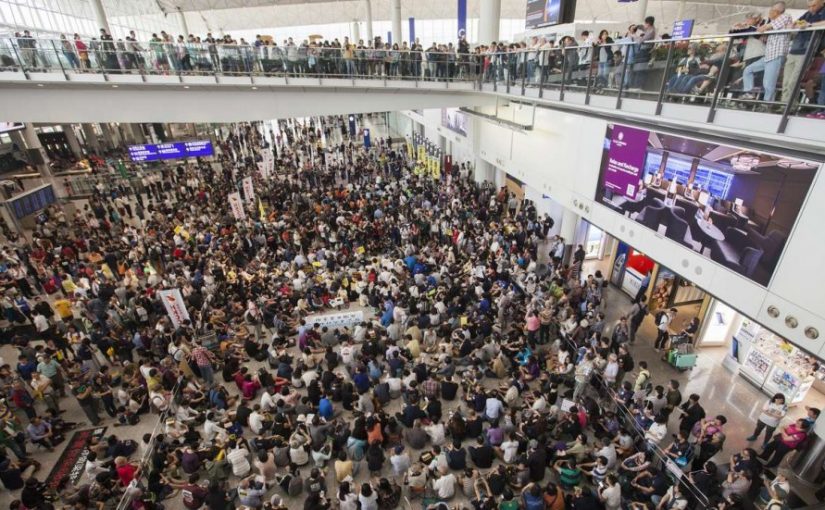 Passengers bumped on overbooked flights has been in the news ALOT recently.

If you live in the UK you’ll be aware of the huge liability banks have had for PPI payouts in the last 10 years. With many airlines operating on the brink of bankruptcy according to some sources; how much are airlines potentially liable for in compensation payouts?

Airhelp, a company that helps passengers claim compensation for delayed flights, provided me with a dataset of airports around the world, number of delayed flights (and seats) eligible for compensation, and a calculated estimate of what the total potential liability was for each airport for compensation during 2016 (based on regulation EC261 which covers delayed, cancelled and overbooked flights). Note, compensation is paid by airlines, not airports. Therefore, this post highlights the airports with the highest number of delays, over-bookings, etc, but is not split out to consider individual airlines.

Whilst the dataset covers a large number of airports around the world (5000), only a subset of airports have data for delayed eligibly (574). This is for 2 reasons; 1) compensation rules differ around the world (see EU vs. US, for example) therefore it is difficult to produce accurate estimates for each geography. 2) Airhelphas a commercial interest in the EU market.

Airhelp provided monetary data in Euro’s (EUR). To keep currency consistency with my other posts on this blog I have converted all figures to US Dollars (USD) using the exchange rate of 1 EUR = 1.09 USD (correct 30th April 2017 via xe.com).

Additional datasets used were from the FAA (US) and CAA (UK) for total aircraft movements at each airport (to calculate the percentage of delayed flights within the US and UK). This data did not differentiate between arriving and departing flights (only departing flights are considered for compensation eligibility), I therefore assumed 50% of operation were departures (roughly in line with LHR figures).

Spread of liability by airport

Airlines who flew out of Heathrow LHR during 2016 were liable for passenger compensation claims to the tune of $0.25 billion USD ($265,998,150.00 USD) — unsurprising given capacity issues at the airport.

If you booked a flight that departed from Europe or was with a European airline, you might have rights under EU law if your flight is delayed to claim the following compensation:

Average compensation per seat groups at both end of the spectrum, 175 airports owe an average of $270 – $300 USD per seat (lowest claim possible is $272.50 USD), 174 owe an average of $630 – $660 USD (max claim possible is $654 USD). Note, values are per seat (not passenger) this is because a passenger can be delayed multiple times per year and thus eligible for more than one compensation claim.

Worst performing airports for on-time departures (US /  UK only)

UK airports make up all 10 of the worst airports for departure operations by compensation liability. 2.24% of flights taking of from LCY London City Airport were liable for compensation claims from passengers.

Note, this dataset only contains US and UK airports for comparison.

There are two clear improvements that can be made to allow for a more comprehensive analysis.

Secondly, accurate operations departure data for all major worldwide airports would improve calculations. Due to the datasets used, the above workings only consider some US airports and UK airports, whilst also use estimated commercial departure figures (departures=total commercial operations / 2).