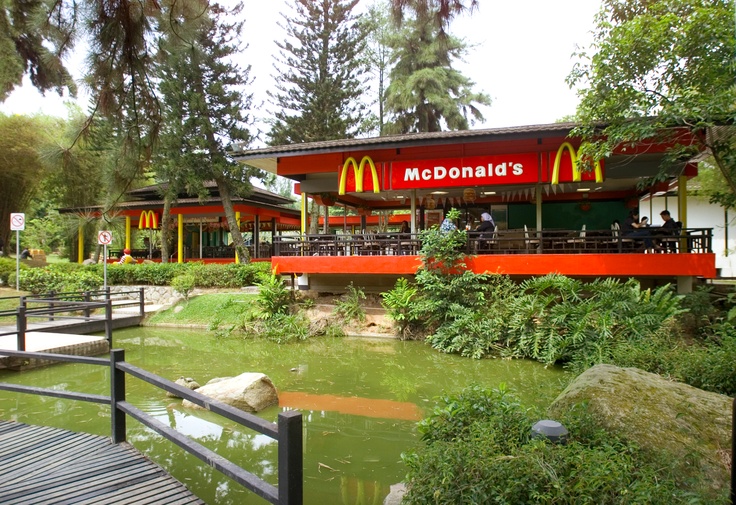 McDonalds has a huge global footprint. How many countries have you visited without one?

Economists have even created the Golden Arches Theory of Conflict Prevention — that is: no two countries that have McDonalds have ever gone to war (the theory has since been disproved).

The Economist has gone so far as creating a Big Mac Index, comparing the price of a Big Mac hamburger around the world.

But which country sells the cheapest Big Mac?

There’s almost $5 USD difference between the cheapest Big Mac found in Ukraine ($1.57 USD) and the most expensive in Switzerland ($6.59 USD).

Mexico and the Philippines saw a dramatic fall in the cost of a Big Mac in dollar terms, a drop of around 30% in both countries.

15 countries did not have data for a 10 year comparison (only 41 displayed). For those considered, Norway has seen the largest Big Mac price reduction by dollar value. Uruguay, Thailand, and China have seen the price of a Big Mac increase by over 50% in dollar terms.

Over 30 years the Big Mac dollar price has almost doubled in Brazil. In all 13 countries considered the Big Mac has increased in dollar terms. Inflation over this period in the US was 120.2% meaning Big Mac are actually getting cheaper in real terms (in the US anyway).

It is important to point out that I used a simple USD price converted from local currency to compare prices in the last three charts. This does not necessarily mean the price of a Big Mac “increased” in local currency. For example, a Big Mac might cost me £1 GBP in 1986 and 2016, but because of fluctuations in exchange rate values the dollar value of the same burgers might vary significantly (e.g $2 in 1986 vs. $6 in 2016).

Calculating purchasing-power parity can show if the Big Mac is undervalued or overvalued compared to the USD (in USA).

In many countries the Big Mac is undervalued. As an example, anyone travelling from the USA with a pocket full of USD would pay 68.8% less for a Big Mac in Ukraine when compared to home (USA).

In only 4 countries out of 55, is the Big Mac overvalued compared to the USD (USA) — Finland, Sweden, Norway and Switzerland. In Switzerland the Big Mac is over 30% more expensive.

In the interests of fairness, comparing fast-food retailer prices around the world in the same way could make for interesting reading. Does McDonalds huge logistic networks mean they can better compete on price?