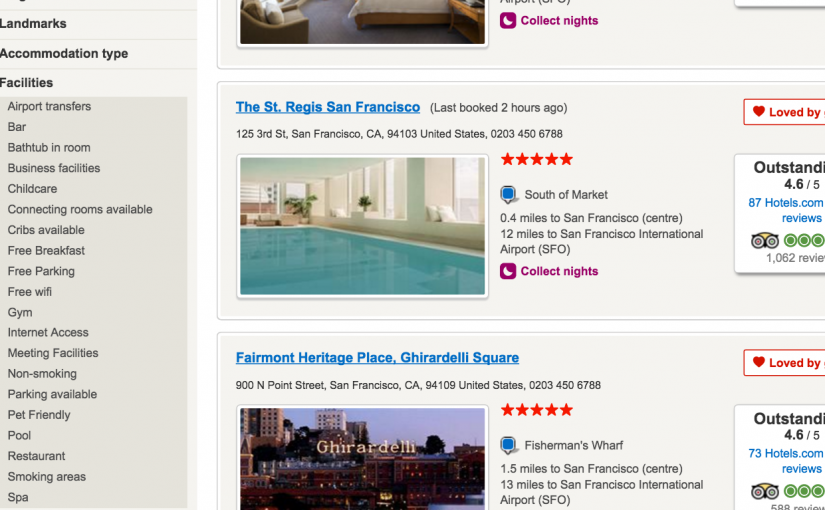 There are lots of factors you can use to rank hotels thanks to online reviews, but for both business and leisure travellers alike WiFi download speed is often one of the most important.

The problem is that many hotels don’t really seem to care about connection quality. Slow WiFi is arguably worse than no WiFi. As long as a hotel can display that little “WiFi Available” box on the amenities list, they’re happy. And travellers think they will be too… until they arrive and realise that anything more than checking email is going to be a problem.

Thankfully HotelWiFiTest is continually crowdsourcing data on hotel WiFi speeds so you can be confident you’ll be able to stream the latest TV series from your room.

So which hotels should you avoid?

HotelWiFiTest provides an expected speed in Mbps for each hotel. This indicates the speed you would likely get at a randomly chosen time of the day.

The site allocates a confidence score to each result, that is a value showing how thoroughly the WiFi has been tested at the hotel. The confidence value depends on several factors, including the number of speed tests taken, how recently the tests occurred, and the diversity of tests in terms of the time of day, day of the week, and point within the travel season.

In addition to HotelWifiTest data I used Akamai’s, “Q4 2015 State of the Internet” report, that contained average internet download speeds by country for comparison.

Hotel room rates used are the cheapest available based on average rates for a standard room on Tripadvisor.

London comes out as the best city for hotel download speeds (by mean d/l speed) of those considered with a mean figure of 20.88 Mbps (median of 11.30 Mbps) for the 384 hotels considered.

San Francisco, a city bubbling with some of the latest and greatest internet technologies fares worst with a mean download speed of only 6.88 Mbps. To put that into comparison, the average download speed within the United States is 14.20 Mbps.

Did you know? The country with the fastest average download speed can be found in South Korea — 26.7 Mbps (Akamai Q4 2015).

Confidence is relatively high for the top 10 hotels, all above 50%. 6 hotels have reported speeds of above 100 Mbps, 4 of which are in London, UK.

The Mark, New York and every hotel Piccadilly, London have estimated download speeds of over 200 Mbps — plenty of bandwidth to stream video (even at 4K resolutions).

Download speeds drop off quickly though — for hotels ranked below 25th speeds are below 50 Mbps.

The slowest hotel tested, the InterCityHotel Berlin Hauptbahnhof (rank 644) in Berlin (ranked 3rd), had a download speed of only 0.08 Mbps — only slightly faster than dial up (0.056 Mbps). At this speed checking (a few) emails is about the best you’ll manage.

41 hotels have an expected download speeds slower than 1Mbps that would make even basic use of many sites frustrating (although YouTube recommends a minimum download speed of 0.5 Mbps).

If you’re paying hundreds of GBP per night for a room you’d likely be expecting good WiFi speed as part of the service. You might even assume a linear relationship between money spent and download speed.

At the hotels with the fastest download speeds the cost per Mbit (expected WiFi speed / average cheapest room rate) ranges between £0.83 – £4.24 GBP. At the slowest hotels the lowest cost per Mbit is, at best, £16 GBP and, at worst, £122 GBP!

Looking at this on a slightly more macro level, I wanted to know if the neighbourhood of a hotel had any bearing on the speed. For instance; would hotels found in business districts typically offer better download speeds?

In the city with the largest number of hotels analysed, London (384 hotels), there is a spread of speeds across the capital. Although some of the fastest speeds are to found in the more traditional tourist areas of the West End, Victoria, and Marble Arch.

Similarly in New York (321) the fastest download speeds can be found in areas with hotels geared mainly towards tourists — around Broadway. However, in New York the hotel spread is more dense when compared to London. This is because the layout of Manhattan being more compact than the urban sprawl of London.

HotelWifiTest download speed data points are: “the speed you would likely get at a randomly chosen time of the day”. Clearly more detailed data on WiFi speeds would increase the accuracy of any analysis.

It would also be interesting to compare average room rates for all hotels and see how strong the correlation between room rate and hotel WiFi download speed really is.