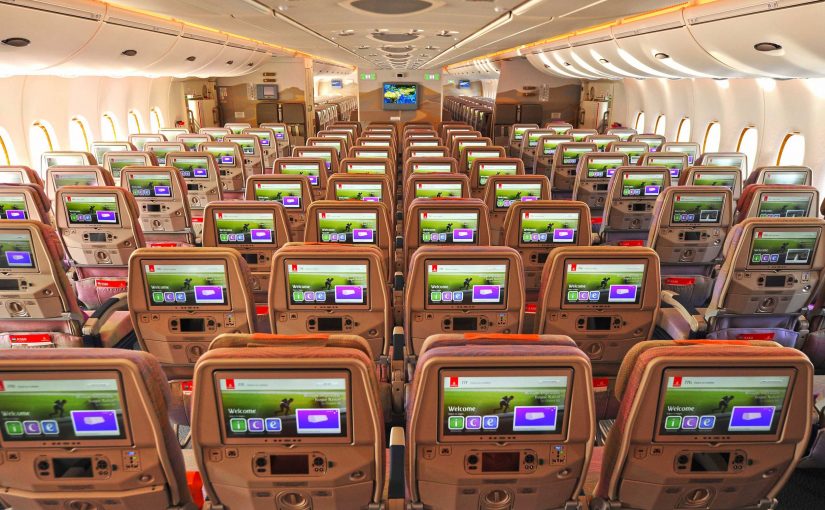 I like to board last. I’ve never understood the appeal of being on the plane any longer than I need too (I’m yet to travel in business class).

A lot of my travel is international, and it often involves flying on the giants of the sky, including Boeing 747s (not for much longer) and the huge Airbus A380.

As I waited to board an A380 on a trip to San Francisco from London this year I did some back of the napkin (literally) calculations at the departure gate. Assuming the 469 seats on the flight were occupied sold at the approximate cost I paid for the ticket ($1000), equals a potential ticket revenue for that flight of $469,000 for the airline. Bear in mind, it is estimated an A380 costs between $26,000 – $29,000 per hour to operate (and the flight is almost 12 hours)!

Clearly my calculation is far from accurate. Though it got me thinking, with multiple flights being operated daily throughout the year, some routes might be generating billions of dollars in revenue yearly.

The company produced a report in February 2018 titled: “Key Facts Behind the World’s Busiest Routes“. It details the world’s busiest trunk routes in terms of the volume of flights that operate on them. For each of the 20 routes the report lists various statistics for each route from passenger numbers to average route length.

Using these statistics, I performed the following analysis.

The choice of aircraft is an important one. Newer aircraft are more fuel efficient, others can fly longer distances.

19 of top 20 busiest routes use Airbus A318/319/320/321 aircraft. Given the majority of the routes (17) all operate outside North America (Boeing’s largest market) this is unsurprising.

The Boeing 737 still proves popular 38 years since it first rolled off the production line (15 operating). Interestingly, despite many routes being considered short-haul, the Airbus A380, with upwards of 469 seats, is operated on 6 routes.

Unsurprisingly the longest, and most expensive ($693) route by lowest ticket price (New York JFK – London LHR) generates the most revenue (over $2 billion dollars). The route carries 3,049,370 passengers yearly (ranked 8th by passengers of all routes) with 3,651,659 available. That is a is a passenger load factor of 84% (above the average load factor of 80% for all routes).

The other two routes that generate more than $1 billion are Hong Kong – Taipei ($1.52 billion) and Soekarno-Hatta International Airport – Singapore ($1.06 billion).

British Airways is the largest operator on the New York JFK – London (42% of all flights) and generates an estimated revenue of $887,549,632.20. Assuming the average ticket cost is 20% higher than the lowest price I found (very likely) would mean this is a $1 billion route for BA. This is almost double the earnings of the two largest airlines on the second and third highest revenue generating routes.

Most of the calculations in this post rely on accurate average ticket prices for routes. Unfortunately I was limited to using SkyScanner to estimate average prices. The biggest improvement to this analysis would be to include accurate ticket revenues.