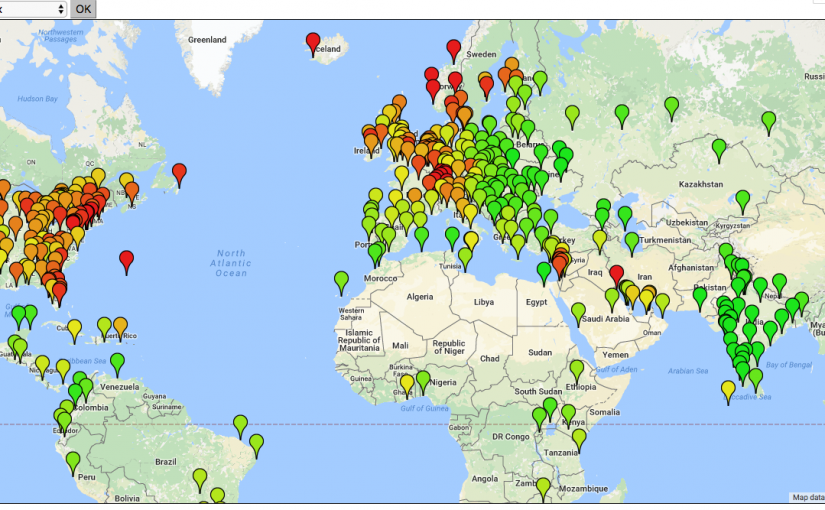 I’m always looking for new places to call home. Cost of living is an important consideration.

Having lived in London, Hong Kong and San Francisco I know how disheartening it is to watch a significant portion of income go on rent — especially when friends from other cities wonder why anyone would ever pay $3000 a month in rent.

When travelling on business or vacation the cost of living variations can be even more astounding. According to Nomadlist (Feb 2017) you can live comfortably $600 a month in Chaing Mai, Thailand.

How has cost of living changed over the last few years around the world? Are there any cities you can live cheaply and comfortably, without being cut off from the outside world?

I pulled data from Numbeo’s Cost of Living rankings, starting 2009. Numbeo collates data on cost of living – down to the cost of milk – from cities around the world. They also collate datasets for other localised metrics including property prices and air quality.

The index uses New York as the index value (New York = 100). The index values therefore represent changes in cost of living against the current cost of living in New York. I used a subset of Numbeo’s Cost of Living rankings using cities that only had data for every year from 2017 to 2011. The Cost of Living index does not account for rental costs.

You can see there has been some movement into the top 10 in recent years — most notably Reykjavik, New York, Seattle and San Francisco all becoming more expensive.

Reykjavik has gone from 42nd to 4th most expensive in just over 5 years. Similarly, San Francisco has moved from 57th to 8th over the same period for cost of living ranking.

In real terms, 7 of the 10 cities (in the top 10) have seen cost of living fall vs. New York in the period 2011 to 2017. In Oslo it has fallen by over 42 points! Only San Francisco and Reykjavik increased in price by over 11 and 18 points respectively over the 7 year period.

Overall, the cheapest cities have remained fairly static over the years — up until 2017 Indian cities were at the bottom list (until Cairo in 2017).

Over the last few year Cairo has seen a turbulent change in cost of living compared to New York. It finds itself at the bottom of our list (144th) comparing 2017 to 2011.

Biggest changes in cost of living vs New York

Numbeo only provides index values for each of the cities against a New York baseline. It would be good to compare actual cost of living rather than just index values to make the numbers more quantifiable.

Cairo, Egypt is a major city with one of the lowest costs of living.