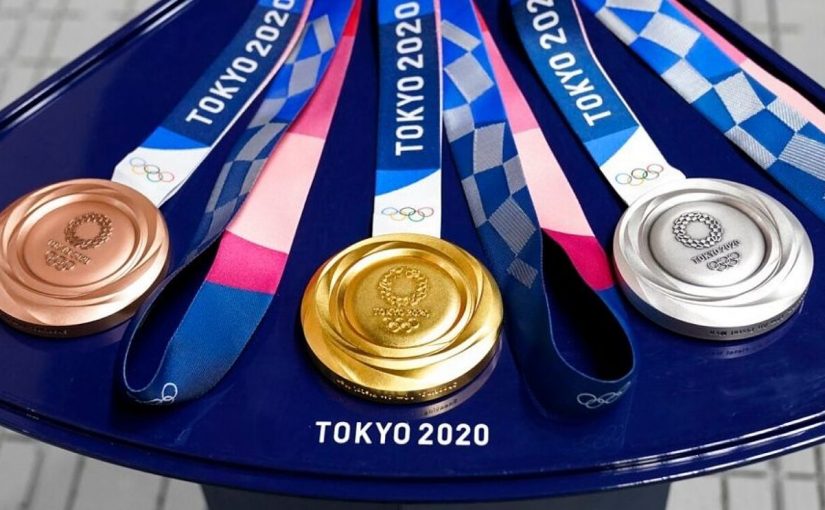 I LOVE THE OLYMPICS!

And almost every other worldwide sporting event.

I was fortunate enough to be able to attend one of the Athletics sessions at the London 2012 games.

I’m writing this post as the Olympics kick off in Tokyo. 8 hours behind London, I find myself waking up to news of Gold medals. It’s one of those periods where you need to shut off from any form of media to avoid spoilers.

Sadly, spectators are banned from the games this year. Whilst I fully understand the decision, and agree with it, my chances of spending part of the summer in Tokyo were again dashed, as they were in 2020. Maybe next year…

Even without spectators, the Olympics requires a full scale logistics effort to get all teams to Japan. In this months post, I decided to look at what a herculean effort is required.

I used IOC data for events and information about medals.

Note for team events, I’ve counted team size as players on the field (e.g. football = 11 players). The actual team size to include substitutes is not considered in this post, even though these team members will be eligible for medals.

All prices (flights and materials cost) use prices correct on July 31st 2021.

Count of athletes at Tokyo 2020 by team

At this years Olympics, 11,313 athletes will be competing.

Many athletes share rooms in the Olympic village, which leaves a requirement for at least 5,657 athlete rooms.

Assuming 3 meals per day (but likely probably much more) that’s 33,939 servings per day. If all athletes are there for 17 days (duration of Olympic event calendar), that’s a total of 576,963 meals.

A quick look at direct flights from London (LHR) to Tokyo (HND) in summer 2022 (1st July – 14th July), shows the cheapest economy ticket at £779 from British Airways. Let’s assume all GBR athletes booked in advance and flew this ticket in 2021, and ignoring training staff and equipment (how do you get horses to the Olympics?), gives a total transport cost of £292,904 (376*£779) for GBR.

At this Olympics many athletes are required to fly home immediately after competing, meaning that all of these tickets will need to be made flexible at additional cost… or perhaps being an Olympian waives change fees?

Count events at 2020 Olympics by discipline

Athletics (48) and swimming (35) events have over twice as many events as any other discipline (male and female events are counted individually). Surprisingly, shooting (15), judo (15) and weightlifting (14) are joint 3rd and 5th by count of events.

In total there are 50 sports, across 20 disciplines, representing 339 events in total. This is five more sports and 18 new events compared to Rio 2016 Olympic Games.

Count of events by gender at Tokyo 2020

In the 1896 Athens games there were no women’s events. How far we’ve come.

It’s important to remember as much as male only events still occur, some events still remain women only too, like synchronized swimming.

Although there are 339 medal events, many more medals are awarded. This is due to the fact that some events are team based (4 x 100m sprint, etc.) where each participant gets a medal.

To make things even more complex, some teams rotate athletes during qualification phases. Athletes that take part in qualification, but do not compete in the final, are also still eligible for a medal.

In April 2017, the Tokyo Olympic Medal Project started. The goal: to salvage 100% of the metals required to make the approximately 5,000 Olympic medals from unwanted electronic devices.

In all, it took 78,985 tons of donated devices, including approximately 6.21 million mobile phones.

At the time of writing rough wholesale prices are as as follow;

The total collected considers all medals, including those for the Paralympics.

Looking again at the Olympics only…

You can see the inclusion of just 6g of gold makes the gold medal almost twice as expensive in materials cost than the silver. Bronze medals look like a bargain.

Cost of all medals

Considering the 1,842 medals awarded (614 of each type) gives a total value of medals of £575,230.62. Ignoring the costs to recycle the materials, the organisers managed to save some money here.

The most expensive Olympic gold ever is the iconic medal won by African American sprinter Jesse Owens at the 1936 Berlin Olympics in Nazi Germany, sold at an auction in 2013 for $1.5m.

Ukrainian boxer Waldimir Klitschko sold his 1996 boxing gold medal for $1m in 2012 and donated the proceeds to charity.

Materials costs considered wholesale market costs of materials. Seeing as all materials were donated, a better calculation for cost to produce (vs. value) would look at recycling costs. Similarly, it would also be interesting to consider the consumer value of materials, which will be much higher than wholesale.

Flight costs were also calculated in a very rough way. It would be much more accurate to consider ticket costs from each country. With numbers from the IOC (including auxiliary team staff) I could come up with a much more thorough analysis of total people travelling to the games in each team too.

I’d also like to include the Tokyo 2020 Paralympic games, not considered in this analysis.